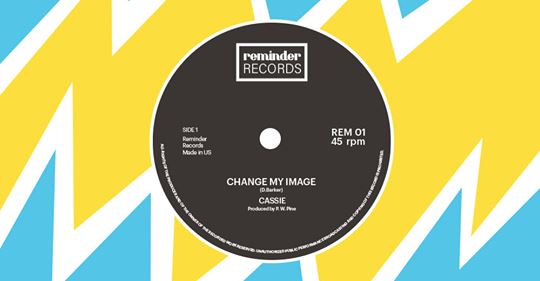 Formed on the Isle of Wight in 1978 the four-piece of Nigel Hayles-Guitar, Debbie Barker – Lead Vocals, Eric Biggs-Bass and Hugh Kim Lewis on drums was originally known as FLIRT before changing their name to CASSIE in 1979; likely as a nod to BLONDIE whose songs the group favored along with the likes of THE PRETENDERS, RAMONES and EDDIE & THE HOT RODS. Despite recording demos for WILF PINE, the former mobbed-up co-manager for BLACK SABBATH, major label deals were not forthcoming. Thus CASSIE issued their only single of two Barker penned, Pine-produced tracks, ‘Change My Image,’ backed-with ‘Will You’ on A.K.A. Records in 1982.

Whether or not the name of the label used for the release – A.K.A. – was any reference to Pine’s numerous underworld connections is unclear.  What is clear, however, is the strength of the two Barker originals. ‘Change My Image’ is a bratty bubblegum-punk paean to future sell-out success (‘Gonna kick off my jeans and start smoking fancy cigarettes!’) while the furious guitar riffing on ‘Will You’ fortunately for today’s listeners finds CASSIE about three years out of step with the prevailing New Pop styles of 1982.

Instantly obscure upon issue, CASSIE’s only record became instantly hard to find.  The band would continue to perform releasing only one other track on a regional compilation before finally breaking up in 1985.

If you would like to bye this single from the publishers and why wouldn’t you, you can do so here www.reminderrecords.com